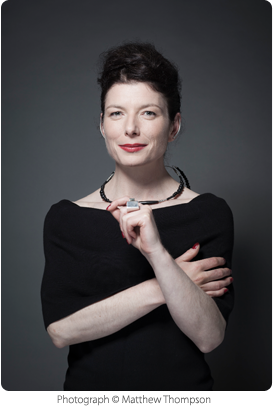 Christina comes from the very unique place of being a self-taught designer. Growing up in Co. Clare in the west of Ireland she was immersed in a multitude of craft traditions by her mother Mary who pushed those traditional boundaries. This instinct was instilled at an early age and continues to be the path to Christina’s design approach. Her career has spanned many disciplines including the interior design of the Audi and Premium Private Member Clubs at the 3 Arena, film, fashion, working with John Rocha and director at an award winning creative agency.

In January 2010, Christina made the decision to return to her first love and to dedicate herself exclusively to jewellery design. Since then, she has developed numerous ready-to-wear and collections, Contour, Osseous and Zephyr. In addition her bridal and eveningwear collections Ethereal and Pearl continue to create a spectacle for the wearer. These collections are enhanced by a bespoke service creating one-of-a-kind pieces.

Recently a bespoke piece ‘Cascade’ from her Contour collection was worn by Suki Waterhouse and pieces from the ready-to-wear Osseous collection were worn by Tamsin Egerton in the feature film ‘Love Rosie’. In addition she was commissioned to create an ancient necklace artifact for the Film ‘Killing Jesus’. Her work has appeared on Off The Rails, Sunday Independent (Life magazine), The Irish Times, The Irish Examiner, Social and Personal, Irish Tatler, Bash, Confetti, Irish Brides and StyleBible.ie

In 2012 she won the prestigious Creative Island Award at Showcase and was nominated /finalist in the Golden Egg Fashion innovation Awards 2013 for ‘Jewellery Designer of the Year’. Her one-of-a-kind pieces have appeared at a number of high-profile exhibitions including ‘Celebrating Irelands Jewellery Makers’ at Dublin Airport, ‘21st Century Icons’ exhibition as part of the Craft Council of Irelands ‘Year of Craft 2011’ at the National Craft Gallery and ‘Adornment’ exhibition a celebration of the artistic quality and craftsmanship of contemporary Irish jewellery.